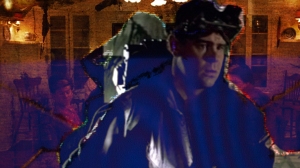 Summary
Synchronize is a tribute to the powerful effect movies can have on our imagination.
This short film takes the viewer through the dream of a videostore clerk whose vision is formed by the movies he sees and hears.

Context
Synchronize is made for everybody who witnessed and loved the 80s and it’s awesome movies. But also a reminder to those who look down upon hollywood that even their imagination is most likely to be shaped by the “american” cliches of yesteryears.

Result
Synchronize has struck a cord with many viewers who grew up in the 80’s and is likely to touch even more people. The more movies you can recognize the more fun this short film gets.